This is our official list in search of the best stand mixers on the market today.

Highest Reviewed Mixers With a Stand

Stand mixers serve a variety of purposes in the kitchen including whipping, whisking, mixing, beating, creaming, and kneading. This versatile kitchen tool, used since its invention in 1908, makes an excellent addition to any kitchen where baking and cooking are frequent occurrences.

A quality stand mixer is capable of eliminating hassle when it comes to making pizza dough or whipping up eggs whites. A few of the benefits of using a stand mixer for baking and food preparation include:

Read on for a breakdown of the five best stand mixers including key features, pros and cons, and rating information. 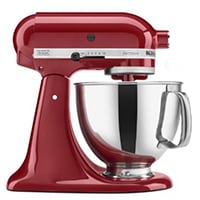 The KitchenAid, an iconic brand in terms of stand mixers, KSM105PSER Artisan Stand Mixer features a large 5-quart stainless steel bowl capable of mixing up to 9 dozen cookies at a time. A specially designed power hub allows for up to 15 additional attachments. 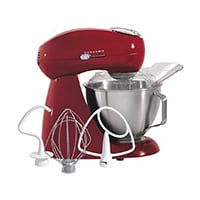 The high-quality machine includes a non-stick beater, dough hook, and whisk – all of which are dishwasher safe as well as the stainless steel bowl. 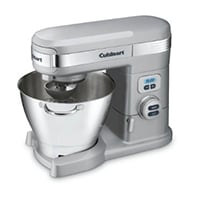 Next on the list is the Cuisinart SM-55BC Stand Mixer featuring a modern, sleek chrome finish. The mixer’s tilt-back head allows for easy access to the mixing bowl and makes attaching accessories simple.

The machine includes several accessories: a chef’s whisk to aerate ingredients, a contoured flat mixing paddle for reaching the bottom and side of the bowl, and a dough hook for easy kneading, as well as a splash-guard and an extra-wide spout.

This versatile stand mixer features the option to purchase optional attachments including a meat grinder, a citrus juicer, a blender, a food processor, or pasta maker. 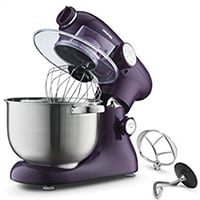 The machine includes 3 non-stick attachments as well as a recipe book. In addition, the mixer features 7 electronically controlled speed settings and a smooth start function that eliminates splatter. 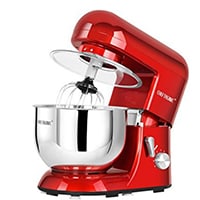 The huge mixing bowl is capable of handling over 4 pounds of ingredients. Users also report that the machine is fairly quiet during the mixing process.

Choosing the best stand mixer to add to your kitchen will be less overwhelming by using the overview above of the top models. Consider trying one of the machines above next time you have a batch of cookies to make or pizza dough to prepare in order to make preparation far easier.