Gigabit switches, or actually network switches in general, are devices that are primarily used to extend the number of ports available on a router.

The term “gigabit” is a designation of its standard data transfer speed, which is required to be compatible with both the end-point device, and the router where the switch will be connected to.

As simple as gigabit switches seem to be, they still have technical specifications that require consideration and comparison. Before buying any switch of your choice, be sure to evaluate your need for these specifications, in order to make the most out of your investment. For this list, however, we will only focus on entry-level 5-port gigabit switches, those that will most likely be favored by casual and light network users.

Without further ado, here are the top five gigabit switches that you can use for small business and home networks.

As far as easy to install gigabit switches, nothing is as fast on our list as the Netgear GS305. Setting up is literally as easy as plugging the uplink cable directly to your main router. No software updates, no configuration required. It does take a bit to configure the devices or computers to the network itself, but apart from that there is technically nothing else to prepare.

To be fair, it does need a little bit of physical setup to be used, but that goes the same for all other 5-port gigabit switches on our list.  Speaking of physical, it’s heavy, but sturdy metal case gives it a more quality feel.

On a side note, the indicator LEDs are placed directly near the ethernet ports. Not that it matters for visibility since it would mostly be installed facing the front anyway.

For an unmanaged gigabit switch, the TP-Link SG-105 features almost the exact same plug-and-play usability as the GS305. However, several hardware-based options allow this particular model to be a bit more optimized for multi-media. Basically, anything that is latency sensitive such as video feed, the SG-105 can handle quite better.

The design of the SG-105 is as standard as it gets. The cooler, bluish finish makes it easy to blend in and be part of your tech landscape. Indicator LEDs are again placed right with the ethernet ports.

Due to its internal hardware configuration, it should be able to handle warmer, enclosed environments. This allows it to be installed in more places without the risk eventual performance failure. 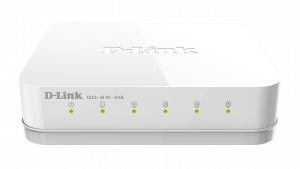 Once again, plug-and-play features significantly define what the D-Link GO-SW-5G can do. D-Link however, likes to tout its various enhancements to their products, and as such, this one boasts its “Green Technology” system. It’s just another fancy term for its capability to detect idle connection status, allowing it to save energy by reducing its power load. Probably important when using several of them at once, but almost negligible when only used once.

Peculiarly, this particular product is advertised for its full-duplex functionality and auto-sensing more than the others in the list, despite it being a staple feature for these types of entry-level gigabit switches.

In stark contrast to the two previous items on our list. This one sports an almost glossy, pure white finish. The indicator LEDs are also away from the ports, with the ethernet ports themselves located at the back. 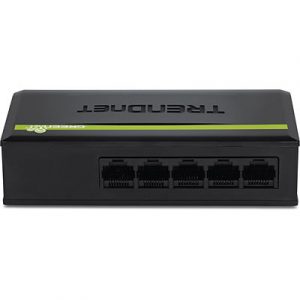 But if you think the energy efficiency SOHO schtick is only for the GO-SW-5G, then you haven’t seen the TRENDnet TEG-S5G yet. Heavily advertising its GREENnet technology, the TEG-S5G is claimed to be as much as 70% more energy efficient than traditional 5-port gigabit switches. This is reinforced by its scalable specs, allowing it to be part of a sub-network of switches, or just used on its own within a small local network.

The TEG-S5G has a literally boxy design, with a “lid” adorning the top, and its indicator LEDs once again away from the ethernet ports.

Overall, it provides high-bandwidth performance in comparison to its price. Certainly still not up to par with its more advanced iterations, but is enough for any minor networking application it might find itself in.

For the best bang out of your buck on an unmanaged SOHO level gigabit switch however, probably nothing will ever beat the TP-Link TL-SG1005D. Even taking its very affordable price aside, it still has reliable and robust data transfer features and options of every single entry within the list. This is topped off by a claimed energy saving efficiency of up to 80%.

For its external look, the straight black-colored finish and curved design is easy enough to place and position anywhere in any type of room. It is actually very portable in size, a but shorter in width, but longer in length, than an ordinary dollar bill.

Do take note that like the GO-SW-5G, this particular product is also not wall-mountable.

Consumer-grade gigabit switches are technically simple in terms of design and function. That being said, extending a network to include more computers or connected devices has several requirements and considerations to fulfill, all according to the layer type of the switch. Due to our list focusing on entry-level SOHO (small office, home office) type gigabit switches, we will omit details regarding network switching layers. Instead, we shall focus on the most popular layer 2 type switches for your gigabit switch choice.

Why are Gigabit Switches necessary?

As explained at the beginning of this list and guide, the necessity of a gigabit switch comes from the need to manage the flow of data without slowing down network traffic. This is across a network of ethernet cable-connected devices, and as per today’s network standards. An older type of switch could work, but the data flow would be largely hindered by its data transfer limitations, a problem that is (comparatively) not present in a good gigabit switch.

What to look for?

The criteria and/or considerations needed to choose the right gigabit switch are as follows:

Though beyond the scope of this list’s subject, three of the most commonly used switches are:

If you want quality gigabit switches under a budget, the option of buying used ones is also viable. They are essentially network extension hubs after all, and a well-preserved gigabit switch should work well as if it was brand new, without the hassle of an introductory cost.

If you are managing a small home network of light-use devices, then chances are a gigabit switch is NOT a necessity. Lesser consumer-grade network switches of slightly lower data transfer speeds can be significantly cheaper. In general, avoid buying gigabit switches that have specifications you most likely not use. If you are planning to use a fully managed switch for example, then be sure that your network will actually need the pinpoint control and setup that it can provide. Otherwise, just stick to the cheaper, but still reliable unmanaged switches.

1.) Can a gigabit switch work with my old router?

3.) Is it better to buy a gigabit switch with more ports for future connectivity?

4.) Unmanaged? Why are most gigabit switches called “unmanaged”?

5.) What does full duplex mean?

There are many technicalities surrounding the use of network switches in general, things that are beyond the scope of a simple consumer-grade gigabit switch list. The only necessary thing that you need to worry about, as a casual user, is the investment, and router compatibility. Choose the right gigabit switch for the right network, and it will always be worth the setup.