Smart refrigerators have been gradually becoming part of the ever-growing list of appliances and devices under the Internet of Things (IoT). Convenience is, as usual, the central theme, and smart fridges are typically advertised to offer other things that you never thought you needed in the kitchen or dining table.

The most instantly noticeable feature of a smart fridge, (or any smart device for that matter) is its network connectivity. This is important to note in a refrigerator since network connectivity often comes with monitoring and adjustment features. and a fridge would most likely make use of it more often than let’s say, your smart rice cooker. Interfacing is usually available via an app, although lesser “smart” models may opt for a more traditional external panel design.

For the most part, smart fridges work like an average fridge. So, basic tips for buying any kind of refrigerator still applies. However, the convenience features that some smart fridge models could bring can actually integrate differently depending on how they are implemented. Remember, a good smart fridge does not only have a balanced set of connectivity-related features, but it also integrates these features well to how the fridges are used for that particular environment.

As we will see in this list, smart fridges are more than just “fridges that talk to the internet”.

As far as practicality goes in refrigerators, Kenmore always does what it does best. A spacious water and ice dispenser that can accommodate even pitchers and water bottles, a convenient French door assembly with the inefficient door-in-door gimmick, adjustable and/or removable shelves, and great LED illumination to view those would-be forgotten corners.

Temperature flow wise, the Kenmore 75043 performs as expected, with variation levels not getting higher than 38.2 to 39.0 degrees throughout. The bottom freezer segregates items into three different shelves, making frozen foods just a little bit easier to access.

As a smart fridge, it is capable of integrating with your  Alexa virtual assistant. You can use voice commands to tweak and adjust any of its settings or operate any of its other features such as the dispenser. Furthermore, Kenmore’s smartphone app makes things even more convenient, with all of the adjustment settings available in just a single view menu, with tiny notifications to tell what exactly is up with the fridge. 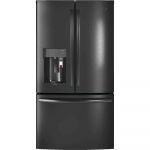 The GE PFE28PBLTS is a spacious 27.8 cubic feet refrigerator that is very much designed in the same way as the Kenmore 75043. This time, however, instead of a big ice dispenser, users are provided with an integrated water dispenser that has a built-in Keurig K-cup Brewing System, a very much convenient feature to anyone who likes a hot cup of perfectly brewed coffee at any time. In addition, it can also provide hot water as per user settings, potentially maximizing its energy use for whenever hot water would actually be needed.

Smart integration options include Alexa, Google Home, and IFTTT. The smartphone app isn’t specially designed for any specific function, but works enough as intended as a monitoring tool and remote control. Take note that it may take a bit more time for the refrigerator to be recognized by your devices than other smart fridge models.

The Kenmore 75049 an alternate version of the 75043. However, it can also be considered a step up from the aforementioned model. It has the same 24 cubic feet of space, has the familiar big water dispenser, and the layout and form factor is also very similar. However, it differs due to one factor: its layout is a bit more flexible overall.

On the bonus side, the Kenmore 75049 also has this clean black finish. Not too shiny, and unlike the stain-prone (pun intended) stainless steel 75043, the 75049 would definitely hold out pretty well for a quite some time before it requires wiping.

As for specs, you can refer directly to the 75043, as it bears similar features, including its iconic Alexa integration enhancements. 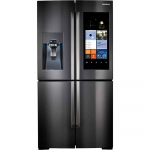 When it comes to stacking the most features per cubic feet of space, the Samsung Family Hub takes the virtual cake. Immediately noticeable is the 21.5-inch touchscreen tablet, which interfaces using Samsung’s own Tizen OS. The OS has a built-in suite of apps that help optimize anything that you want to do in the kitchen or dining table.

Aside from the standard fanfare of food management apps like grocery and delivery services, writing boards and recipe guides, the Samsung Family Hub 2.0 also has a camera. Yes, a camera. The idea of snapping photos of your food might sound ridiculous at first, but it actually is quite convenient. One, you don’t have to inadvertently let heat inside as you check on your stuff, and two, you can check the contents of your fridge on your smartphone anytime, anywhere. In addition, it also has other nifty features such as placing markers on your food or listing them, to put labels or expiration dates that countdown in real time.

The fridge itself is quite standard. Opening the French door assembly reveals 16.2 cubic feet of space with all the adjustable shelves drawers you would expect. The 8 cubic feet freezer has at least two separate compartments, so you can pull up the upper drawer for other stuff. There is a separate area in the freezer drawer called the Flex zone, where you can put items and set its temperature separate from the rest of the refrigerator. 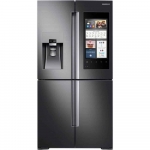 Samsung introduced a major upgrade for its Family Hub smart refrigerator with its second iteration. Newer OS version, updated features, and new options make this one the newest (and priciest) kid on the block.

As introduced by the Family Hub 1.0 most of its smart features are focused on its 21.5-inch capacitive touchscreen tablet. Entertainment apps, delivery options, saved recipe guides, and the ever-convenient-but-still-weird interior camera.

The Family Hub 2.0 introduces its newest feature, Bixby integration. Yes, Samsung’s very own virtual assistant is now available for this smart fridge. Unlike the Kenmore fridges mentioned earlier which integrate with an existing Alexa unit, Bixby is directly installed within the unit. Voice commands can be given directly, albeit still with the same limitations as the original Bixby box itself.

Oh, and yes, this thing is also a fridge by the way.

The most widely criticized factor in smart refrigerators is the fact that most, sometimes even all, of its so-called “smart” features are either unnecessary or outright disruptive to the actual purpose of a refrigerator. However, with the correct smart refrigerator model users can realize how integrated its functions can actually be to kitchen and dining room use.

The key is subtlety. If it is a feature that you can do and forget about, or do as a mindless routine, then it is a smart feature worth keeping in the kitchen.

In fact, as a smart version of a widely used basic home appliance, smart fridges could actually have the potential to become a standard in the near future. That is, so long as more and more devices become part of the ever-growing family of connected products.

What are the benefits?

There are also a number of specific minor benefits, such as post-its now taking the form of digital “leave-it” messages, or recipes that can be tailored exactly to the contents of the fridge. There are even delivery apps on more sophisticated models to bring the food to the user directly.

What to look for?

At the moment, there are currently very few smart fridges in the market, so choice isn’t exactly a luxury. At the very least however, you’d want to actively look for these supportive features, characteristics, and options for your smart refrigerator before any other gimmick:

Smart fridges are, by inherent design, very prone to have bloated features. After all, they provide so much more information than what your “dumb” fridges can usually give. As a rule of thumb, entertainment features should be kept to a minimum, and any feature that is not directly related to the fridge or its contents should be considered as secondary options. If you think a feature would not be used as often, evaluate. If the entire package doesn’t add up to its price, another model might be a better option.

That, or saving up your budget for a future upcoming smart fridge.

1.) Will my access interface (Wi-Fi connection, tablet display, etc.) last as long as the fridge itself?

2.) Won’t my smart fridge be hacked and its features compromised?

4.) Should I buy a new model if a more updated version comes out?

Not Just a Toy?

The smart refrigerator market is very much still in its infancy, despite having a number of product lineups over the last few years. But even as consumers continue to be skeptical of its practicality, companies continue to produce more and more models. In the future, we are bound to see newer ideas and better applications to smart fridges, though hopefully prices should begin falling down at that point.