When shopping for these products, the sensor is an important feature to consider. Most systems use a CMOS or CCD sensor. CMOS sensors use less power and provide a better image in low-light conditions, but CCD sensors are better at handling environments with fluctuating light. Below, you’ll find reviews for five of the top rearview camera systems available. 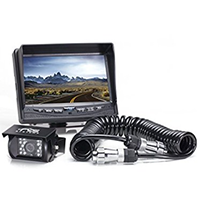 The Rear View Safety system features a color CCD infra-red backup camera, which can withstand harsh weather and treacherous conditions. This system comes with a seven-inch digital TFT LCD rearview monitor, and for convenience, it has a universal mount and stand.

The camera uses a total of 18 infra-red lights and makes it easier to see in the darkest conditions. It comes with a trailer quick connect, which is perfect for drivers who need to see behind a trailer.

The pixel resolution for the monitor is super sharp and delivers a digital image. The Rear View Safety backup camera uses infra-red lights to provide night vision, and it improves visibility when there is no ambient light.

The power harness that is included with the system can handle three cameras, which allows for an extra two cameras to be added to the system. The ultra-wide viewing angle delivers a complete view and prevents accidents. 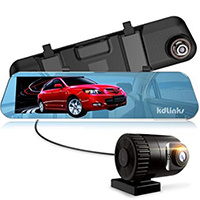 The KDLINKS R100 offers two different camera modes, and it can record video in 1080p full HD. The camera features a slim design and comes with a 16GB micro SD card.

With an automatic shutoff, the KDLINKS R100 will automatically turn off after it detects no movement for five minutes. This advanced rearview camera system has a built-in parking mode, and when it detects movement, it will start recording for a short period of time, which is a great security feature.

The KDLINKS R100 uses high-tech lenses and delivers superior night vision. It has a huge 800mah battery, and even with no power, it can last much longer than other cameras.

The camera supports memory cards up to 128GB, and the system comes with a high-quality IPS screen, which is much better than normal TN screens. 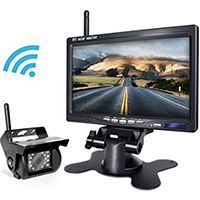 The eRapta ERW01 is a wireless system, and it’s designed for greater versatility. With wireless technology, the components can communicate up to a distance of 20 meters, and the main purpose of the camera is to eliminate blind spots.

The eRapta ERW01 improves visibility at night with infrared technology, and it uses 18 infrared lights to illuminate the space behind the vehicle. The IR camera makes it easy to see in total darkness, and to make parking easier, it offers a wide viewing angle.

The camera is also waterproof and features an IP69K rating. Since it can work in all weather conditions, it’s ideal for any environment. The eRapta ERW01 is made with an updated antenna line, and it can send and receive a strong wireless signal. 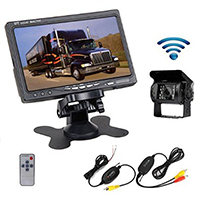 The Camecho RC backup system features a seven-inch full color LCD monitor, and when reversing, it allows for an automatic switch to the rear view.

Depending on preferences, the monitor can be mounted to the dash or roof, and with built-in night vision, it makes it easier to see at night. The Camecho RC backup system is made with 18 IR LEDs, which produce plenty of light when the ambient light is low.

The camera that comes with this system can see up to a distance of 50 feet, and it’s even effective in total darkness. The camera case features an IP67 waterproof rating, and for increased durability, it has a hard metal case. This rearview camera system is suitable for most vehicles, and it’s can be especially useful for campers, RVs, trailers and caravans. 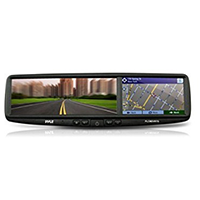 The Pyle Car Vehicle backup system features smart technology, and with a built-in camera, it provides a clear view of the space behind the vehicle. It has a 4.3-inch LCD display screen and built-in navigation.

For hands-free calling, it has built-in Bluetooth, and it can read micro SD cards and USB flash drives. This product is designed to be a replacement for an existing rearview mirror, and it even comes with a DVR camcorder recorder.

The LCD display makes it easy to see behind the vehicle, and it can record video in 720p HD. The crisp HD resolution makes objects easy to see, and the Pyle Car Vehicle backup system is compatible with up to two additional cameras.

Every year, several lives are lost because many drivers don’t have a rearview camera. The rearview mirror allows drivers to see tall objects, but it’s not the best solution for shorter objects.

This lack of visibility has caused many drivers to unknowingly run over small children, and it’s the primary reason why the Department of Transportation will soon require all new vehicles to be equipped with a rearview video system.

However, this requirement is only for new cars, and the owners of older vehicles will need to consider getting a high-quality rearview camera system. Once the system is installed, it becomes much easier to see shorter objects, and most cameras deliver a wide-angle view of the area directly behind the vehicle.

With the best rear-view camera system, it’s much easier to avoid future accidents, which can be very expensive. A camera system can help drivers avoid backing into objects, and it’s just as useful for preventing drivers from backing over animals or children.

A rear view camera, also called backup camera, is a video camera that helps vehicles to back up. Each vehicle has an area behind it which is a blind spot, and as the vehicle gets taller, the blind spot gets longer.

The Insurance Institute for Highway Safety says that around 292 people are killed each year in a backup crash, and 18,000 are injured. The victims are most often children, who can’t be seen because of their height, and the elderly.

Rear view cameras are the most promising technology to help reduce the number of fatalities, since they reduce the blind zone by about 90%. In 2002, a pediatrician, Greg Gulbransen, went outside to back his car into the driveway and didn’t realise his two year old had followed him. He felt a bump and on getting out of the car, realised that he had backed over his own son, who died soon afterwards.

Back up cameras are pointed downwards to view what is on the ground as well as what is behind the car. The view from the camera is horizontally flipped to give you a mirror image that is similar to what you’re seeing in your rear view mirror. If you add on a camera to your car then there is usually a display that can be mounted to your dashboard. They are either connected via wires or through Bluetooth or radio waves.

Some cameras add lines in so that you can see how far you are away from the object you’re looking at. They can also show lines of where you’re heading, so that you can tell in which direction you should be moving. Some rear view camera systems use several cameras to give you a view of the entire area around your car. Others will give you different angles, such as wide angle, or top down, depending on what you need at the time.

They are not foolproof however, as the view can be obscured if the camera gets dirty, or wet, or it gets snow on it. Direct sunlight can also shine in so that you can’t see anything – particularly if the sun is low on the horizon.

If you don’t have a rear view camera already then you can definitely benefit from getting one. The fact that they are going to be required on all new vehicles by May of 2020 indicates that they are important.

The most important reason for investing in one is to prevent yourself from backing up and running over a child. Often a small child won’t show up in your rear view mirror. They are also not very aware of their surroundings and likely to walk close to a car that has its motor running. That child could be your own.

In addition, a rear view camera is a great benefit when you’re parking. It can really help you get into a tight spot or parallel park, since you can see where the kerb is. You can also far more easily gauge how close you are to the car behind. A camera can also show something small that might damage your car if you backed into it, such as a post or low wall.

You can get a rear view camera and add it to your vehicle, so you don’t have to buy a new car. You can also buy one to put behind your trailer or motor home. This would help you see behind you on the road and when backing up. Cameras that work with trailers usually have a long cable that can run between the camera and the display.

They can be installed pretty easily. Some mount on the license plate, while others require a drill to be attached to the bumper. Others only need a few screws. But many come with video instructions of how to install them.

What To Look For?

Quality is very important – you want to have a nice clear picture so that you can see what’s behind you. Look for one that has good visibility at night as well. The Lux rating will help you discern its night time performance – a night with a full moon is 0.1 Lux. A sunny day is 10,000 Lux. Also look for a large display, as if you have a tiny display you will only get minimal benefits from the camera.

A rear view mirror camera will show up where you’re already used to looking – on your rear view mirror, but they can be hard to install. A dashboard mounted display can vary from wired to wireless.

If you would like some help when parking, then look for the kind of backup camera that has parking lines to show you where you’re headed. The lines can also help you figure out how far you really are from what you can see.

Never solely depend on your rear view camera. Always use your mirrors and look over your shoulders too, when backing up.

Where do I mount the camera?

Some cameras fit on to a license plate or over it with a strap. Some cars have an inset area on the back which you can use for a lip mounted camera that will look more subtle. Some systems give you a bracket, and you can install it wherever you want.

With the best rear-view camera system, it’s much easier to avoid serious accidents, and since most of these products are equipped with night vision, they make it possible to see at night and avoid hazards that would normally be almost impossible to see.

More From: For your vehicle