This is our official list of the best drones for kids on the market today. Scroll further down for full details on each product and an overview of choosing a quality drone for your kid.

5 Highest Reviewed Drones for Kids to Play With

Drone is the popular name, but this type of aircraft is officially referred to as an Unmanned Aerial Vehicle(UAV). When you couple one with its controller and a screen for seeing live camera footage and the aircraft’s telemetry, it becomes a UAS or Unmanned Aerial System. UAV and UAS are important terms to know because that is how they are referred to by the FAA.

It is important to know that it is required now for all “drones” to be registered with the FAA if they weigh 0.55 pounds (250 grams) or more. It is inexpensive to register one for hobby use, and all owned drones can be registered under the same FAA license number.

The rules are in a transitional phase to catch up with the latest UAS technologies, but safe and compliant flying is easy using today’s drone technology. Parents should make sure kids fly according to established altitude rules that vary depending on where one flies. UAV pilots should also maintain a line of sight, never fly over people, and give a notification call to any nearby airports or helipads before flying. The FAA B4U Fly app is available for Android and Apple devices to make it easy to know if there are any local airfields, airports, or heliports.

Many available quadcopter models are under 250 grams and not required to be registered with the FAA. For those looking for the best drone for kids, here are the five top affordable models. 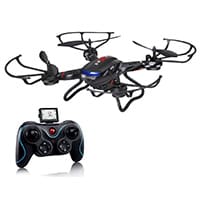 The F181 RC Quadcopter is a step up from your regular basic UAV. It uses a four-channel controller operating at 2.4 GHz, and it will hover in place when the control sticks are released. A button press will get the quadcopter to return to the controller, and the headless function permits easy directional control of the aircraft for beginners.

The F181 comes with an extra drone battery to get twice the flight time of other models. It shoots video at 1280×720 at 30 frames per second for great HD video. Though some descriptions indicate this drone is under 0.55 FAA weight limit for registration, it actually does weight 397 grams (14 oz), so it is required to be registered at the FAA Drone Registration website. 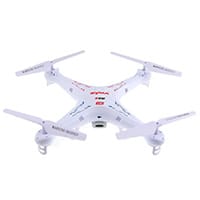 This drone by Syma is 12 inches in width and length and just over 3 inches high. That makes it as wide as a DJI Phantom 3 drone but at about 1/10 the cost of their basic model. Plus, the X5C also has an HD camera for taking video footage and still images in flight.

Its six-axis gyroscope permits the throw-and-fly feature that allows pilots to literally toss the drone into the air to begin the flight. The X5C also has an eversion switch to make flips in flight easy to do. The built-in HD camera is great for shooting aerial footage, and the LED lights help pilots see the direction the aircraft is facing for easier directional flight control at a distance. The Syma X5C weighs about two pounds, so it will need to be registered for hobby use at the FAA Drone Registration website. 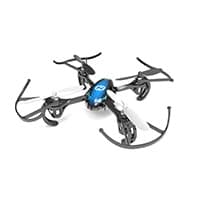 Its powerful motors help keep flight stable even in windy conditions, and its design and fuselage shape and graphics look futuristic. Blue and red LED lights to make it easy to track in flight, and the headless mode option makes it easy for beginner pilots to control when flight conditions make it difficult to tell which way the aircraft if facing in flight. Like other drones in this class, the flight distance from the controller is about 50 meters or 164 feet. The Predator is under 250 grams, so it does not require FAA registration. 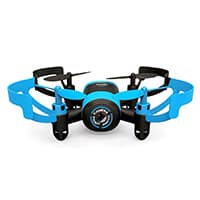 The Blue Bee Super Mini Drone from Hasakee has the features needed by beginner pilots, but it also has the features experienced drone pilots will enjoy. It has a six-axis gyro stabilization system for stability in flight.

It also has a high and low-speed setting for training beginner drone pilots and keeping it fun for advanced pilots. The Blue Bee Super Mini Drone’s low price makes it fun to fly without the worry that those who have purchased expensive drones usually have. It is also available in either yellow or blue to make it easy for two pilots to keep track of their drones in a race or normal flight.

The Mini UFO drone looks cool and is a little less than four inches wide. It can fit in the palm of a hand, has safety bumpers that completely surround the props, and has a range of just under 100 feet from the controller.

Its low price makes it a great choice for a first drone. It does not have a camera, but it can do 360-degree rolls making every moment in the air fun and filled with action. If a pilot gets a little nervous mid-flight, pressing the One-Key Return button brings the quadcopter back to the remote controller automatically.

With the drones available at great prices, anyone can become a pilot. Flying a UAV is fun, but safety should be on every pilot’s mind. The rules for hobby flying of drones are available at the FAA website.

The best drone for kids is one that includes a one-button return feature, and beginners should also take advantage of the headless mode feature of many drones. This feature allows for the forward and backward directional control stick to always move the aircraft forward and backward relative to the pilot no matter its actual orientation in the air.