Card games for adult parties depart the paved road from regular card games and head off into the wild frontier.  A good chunk encourages drinking and profanity. While others rely on social taboos that are sexually explicit in nature, with a hilarious twist.

The best card games for adults do not eliminate players and are inclusive of a larger number of players.  Just remember that some games can be downright offensive, so give players fair warning if they choose to play, then dive into awkward, hilarious fun.

Interaction is a key ingredient to a successful adult party.  Revive a dying party quickly with a trusted go-to adult card gam. 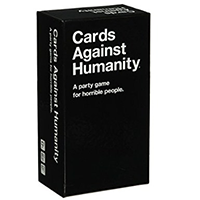 Cards Against Humanity is a party game for horrible people and was an instant classic.  If you don’t have this, you must get it. The highest selling card game for adults is as despicable and awkward as you and your friends are.

The game is simple. Each round, one player asks a question from a Black Card, and everyone else answers with their funniest White Card. A winner is selected each round and you don’t know until the end who won.

You will be going from one extreme feeling to another. You will be blushing, gagging, and laughing uncontrollably. The best part is sometimes you will even have a hard time reading the cards out loud out.

This game is addictive for some and it can be played again and again.  Want a guaranteed reaction out of the players, this game is the one for you. 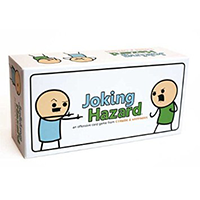 Joking Hazard is from the creators of Cyanide & Happiness, the hit webcomic, that pushes boundaries and touches on the bad, ugly, and downright terrible behaviors all in a comic fun way.

360-panel cards, including 10 add-your-own-words cards combine to for the craziest of situations. You’re building a three-pane comic strip. The seemingly unassociated panes comically fit together in sequences with ease. With just the right blend of dirty and hilarious combinations to keep you on your toes!

This card game for adults is really for the more messed up sense of humor people out there. Subjects are offensive and include taboo topics in a warped way. If this sounds like the type of ridiculousness your friends are up to, then order this game today. 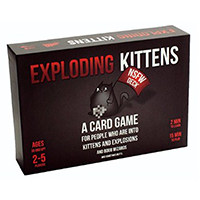 Friends will want to borrow it from you once you play it with them some claim. The NSFW version of this game contains the full version of Exploding Kittens, but the artwork has been replaced with content too horrible to be used in the original Exploding Kittens game.

The object of the game is similar to Russian Roulette.  Each player to draw a card until one unlucky player draws an exploding kitty. Exploding Kittens was developed from the most highly funded game Kickstarter campaign in the history of the platform.

Exploding Kittens is a game for two to five players but can combine decks for up to nine players.

4.) Disturbed Friends – This Game Should Be Banned 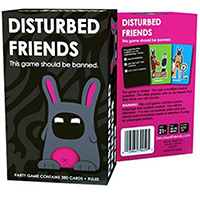 You will be faced with horrible situations from sexual scenarios and unethical debates that may test your friendships or have everyone erupting in laughter.

One unlucky player picks up a multiple choice question card and reads it out loud. The other players vote on what answer they think their friend will pick. The first player to get 10 winning cards wins.

5.) Never Have I Ever – The Adult Party Card Game of Poor Life Decisions

The card game for adults Never Have I Ever is popular on Ellen DeGeneres show, as she plays it with her guests.  It can be shocking to hear your friends’ secrets and no judgments are the only rules of the game.

Each round, one player reads a Red Rule Card, and everyone else answers with their best Blue Card. The first person to get 10 Blue Cards on their “Wall of Shame,” wins the game as they are the one that has made the poorest life decisions.

This card game has you reliving some of your most embarrassing and funny moments to score points and win.

Card games for adults are games you can play quite easily, without a whole lot of concentration, that is humorous and promote conversation, confidence, and fun. Since they’re for adults, many of them are rude and can be offensive, so be aware of that before you start looking.

There are some less offensive games that tend to be the more traditional type, like Poker. Then there are the party games that are everything but wholesome, and definitely adult-themed.

Some involve a lot of shouting, others will no doubt end up in you getting flustered or embarrassed, others will try and make you give away all the secrets that no-one ever knew about you.

These games are usually aimed at adults who are not worried about morals and obscenities and don’t have much of a sense of shame. They are a way of enjoying yourself as a group and are great for an indoor night out.

What To Look For

Be aware that many of these games can be offensive and can contain swear words, so read some reviews so that you know what the content is likely to be. Some card games offer a clean alternative version, so if you are worried about that then that might be a good option.

Look for cards that are made of a good quality card stock, so if drinks get spilled on them it’s not a big deal.

These are ideal for a drunken night out when you just want to have some fun, and are not bothered how bad the conversation gets. The greatest benefit of card games is that they are highly portable – just stick them in your pocket or bag, and you have at least an hour of fun cut out for you.

Card games can also be good to keep your reflexes quick, help your motor skills, and give you more confidence in talking in groups. These types of games will help you break any barriers down and get to know each other really well, and generally, all they need to get going is a flat surface and a few people who are ready to relax and let down their hair a little.

These days we can often end up hanging out with our friends while we’re all looking at our own phones. Technology has a way of building distance between us. Card games will do the opposite and give you some personal interaction to improve your relationships and help your mind stay sharp at the same time.

These games will help you promote a laid back atmosphere, get rid of some stress, and get excited. It will help you connect with others, and bond in ways that you have never done before.

You will find yourselves talking, relaxing, and having a lot of belly laughs. Sarcastic people who can laugh at themselves usually get a lot of fun from these kinds of humorous games. If you host get-togethers, these are good games to have on hand.

Be cautious about which game you buy if you have principles, morals or anything else which means you might get offended and not agree with the content. Read the reviews first, as a lot of these games are based on sexual humor and rude jokes.

Avoid playing these games around children, as they are definitely intended for adults only, and you might end up with a lot of explaining to do. Also, some of these games have a lot of American, British or Western culture in them, so if you are from a different culture you might need to go for something that is aimed at a wider audience.

Watch out for too large of a group playing these games. Many have no upward limit, but it is hard for everyone to see the cards if the group is too large, and it can take a while to get around everyone.

If you prefer strategy then you might not like these card games so much, as they tend to be more biased towards luck and humor, and for some, you need to be quick-witted.

What if there are too many offensive cards for my friends to be able to play?

One suggestion is to go through your card deck once you’ve bought it and take out any cards that are offensive to you so that you don’t end up embarrassed on the night that you play with your friends. Another thing that some people do is to go through the cards with a sharpie and blot out any words that you might want to censor for more sensitive friends.

When are some good times to play these games?

Ideas for good scenarios would be a hen night or bachelor/bachelorette party, New Year’s Eve, a game night with your adult friends, or a birthday party.

Can you play with your family?

It depends on how well you get on with your family, and how easily offended everyone is. Most people say they play it with friends rather than family – but if you do want to give it a try then maybe go through the cards first and remove any that could cause problems.

How many players do you need for the games?

It depends on the game, but a good-sized group usually works, of about 4 people upwards. 6 to 8 people can be an ideal sized group, as you don’t have to wait too long to get around everyone, but it’s big enough to have fun.

Will the game end up in arguments?

It depends on the group you’re with. These are probably best for a group of friends who are relaxed and happy to have fun, but they have been known to cause problems in some relationships, so they might not be good if you fight a lot already, or are a new couple that are still trying to get on steady feet.

The very best card games for adults help you to entertain and push some boundaries for fun with your friends and sometimes family. Enjoy these games and feel the freedom of uninhibited fun in a safe environment.

Most players of card games can’t stop at buying just one and many of the card games on this list are the go-to for anyone looking for fun with a lively bounce of adults. Enjoy laughter so hard your side hurts and shocking truth you might find out about others, all in the name of fun.